Every dog, and every breed of dog, has a very different personality.  Getting the right fit for your family will make you – and your new pup – very happy. Today, we’re taking a closer look at the German Shepherd.

Unsurprisingly, German Shepherds originated in Germany in the 1800s. They’re an intelligent and protective breed, originally bred to guard herds against predators. Their intelligence and watchful nature also translate into loyalty and courage.

They’re currently the second most popular dog breed according to the AKC.

German Shepherd Dogs, also known as GSDs are very smart, easy to train, are “workers” by nature. They will bond with their humans, including children if they are raised together. They are courageous and committed to protecting their pack. This is why GSDs have become known as excellent guard dogs and are often trained for police work. Generally, they do well with other dogs in their own household, especially if they are introduced when the shepherd is young.

The Bad: Can Be Aloof

Some people believe that German Shepherds are aggressive, but that isn’t the case naturally. They do bond closely with their humans, so they may seem aloof to strangers.  GSDs may not be right for households that get lots of visitors. They require a lot of training so their instincts for protection don’t become aggressive or destructive. Because they are smart and easy to train,  an investment into obedience school will help give them, and you, a good foundation.

German Shepherd Dogs are Best When: 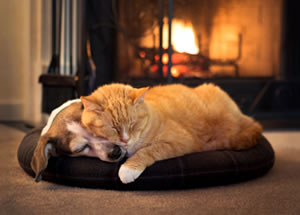